Willmeng Construction has delivered many notable construction projects, but there is something special about building a new airport passenger. Especially one that has been in the works for so many years. The dedication ceremony for the new passenger terminal at Prescott Regional Airport Ernest A. Love Field was a celebration for a growing region that can now proudly welcome visitors with a modern, eye-catching terminal that captures the natural beauty of Yavapai County. 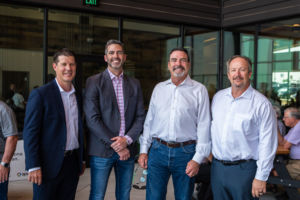 Details of the Prescott Regional Airport

Willmeng built the new $13.9 million terminal along with their project partner, Prescott-based Fann Contracting, which is a heavy civil construction firm. It replaced a small, outdated facility that dates back to the 1940s. In addition, with the work of local, state and national officials, Willmeng and the team delivered it on time.

“Great things happen when there’s a great vision from an aligned city council, aligned mayors in the region and they get behind a great leader like Dr. Robin Sobotta, (Airport Director)” said Willmeng CEO James Murphy during the private terminal dedication ceremony on Friday, June 18. More than 200 state and local government officials, FAA and TSA representatives and special guests attended the event. “When I got the plans for this terminal, you could see on paper that DWL (Architects + Planners, Inc.) killed it. It is regionally significant, the glass, the ceiling; you could see on paper that this terminal was outstanding.” 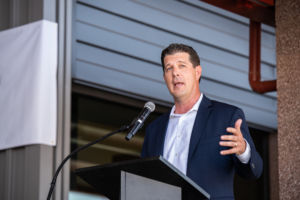 Secondly, an open house followed the dedication event on Saturday, June 19. This allowed members of the community to tour the entire facility and talk with members of the Prescott Regional Airport staff. All while learning more about the new terminal and services that the airport offers the surrounding communities.

DWL Architects + Planners, Inc. from Phoenix designed the terminal with Prescott architecture firm Michael Taylor Architects Inc. providing local assistance. Dibble Engineering provided civil engineering and LSW Engineers were the structural engineers on the project. Willmeng strived to utilize local subcontractors as much as possible on this project. Murphy estimates that about 90 percent of the subcontractors involved in the construction of the new terminal were from the Prescott region. Including Willmeng’s partner on the project, Fann Contracting.

The terminal itself was just one part of the overall scope of the work performed at the airport. Airplane hangars were torn down and new entry roads were designed and built. This required the relocation of utility lines that ran under the property. Willmeng also built new parking areas, a new apron and new taxiways. All of that work, along with construction of the terminal building itself, was done without causing any interruptions to normal airport operations.

Construction Materials at the Airport

The new terminal building is 18,000 square feet of glass, steel, metal facing and masonry. The most striking feature of the facility is the Douglas Fir timber ceiling, which covers the entire terminal.  The Prescott region inspired the “big roof” concept, and the construction team executed that vision. The roof has no exposed electrical conduits or HVAC vents to maximize the visibility of the ceiling. Willmeng and the team also built with expansion in mind. The current outdoor courtyard waiting area was designed to quickly be transformed into additional gate holding areas as the airport grows in the future. 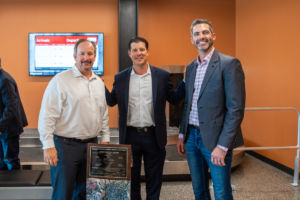